The Denham park asset was acquired 100% by Vitrinite Pty Ltd on 30th of August 2016 and consists of 8 sub blocks over approximately 26 km2.

Vitrinite has completed an initial drilling phase and intersected a 5 m coal interval at 170 m depth. Chips from this interval gave CSN values from 7.5 – 9.

The Denham Park asset is in the north of the Collinsville Shelf to the west of the Nebo Synclinorium within the Bowen Basin. The sedimentary succession in this area is composed of the Early Permian Back Creek Group and the overlying Blackwater Group. These Permian sediments have a varying thickness of Cenozoic cover in the form of basalt and alluvium. Sediments in this area dip gently to the east.

The target coal seams of the Denham Park asset include the Goonyella Lower seams as well as coal seams within the Back-Creek Group.

Chips samples of a coal seam intersected within the tenement over a 5 m interval show CSN values from 7.5 – 9. Nearby mining operations produce a hard coking coal product from the Moranbah Middle and Moranbah Lower coal seams. 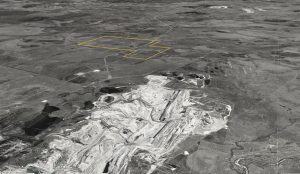