The Wolfang tenements are held 100% by Vitrinite Pty Ltd and were acquired on the 30th of August 2016.

Coking coal has been identified north and south of the project areas, from Valeria/Capella/Karin Basin to Rugby. Vitrinite flew a 400m spaced Falcon Airborne Gravity Gradiometer (AGG) survey over the Wolfang project area. Inversion modelling of the geophysical data in conjunction with historic data review has identified 20 new targets, some of which have already confirmed Permian Sediments including coal from previous exploration.

The Wolfang asset is located on the western edge of the Bowen Basin within the Capella Block and the Springsure Shelf which is characterised by Permian sediments. The area is mapped as Late Permian Back Creek Group, Anakie Metamorphic Group and Silver Hill Volcanics. Local intrusions include the Retreat Supersuite as well as the more recent Peak Range Intrusives.

Quality of coals from projects in this area (Clermont, Blair Athol, Valeria & Karin Basin) range from Thermal to Coking coal. Seams can be exceptionally thick and clean similar to the deposits at Blair Athol and Clermont mines. The Wolfang asset is also along strike of the Valeria Project which is known to contain a coking product. 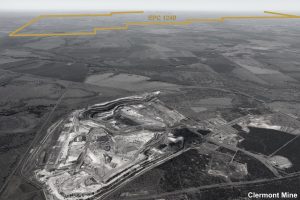